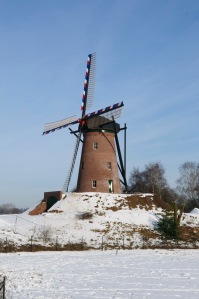 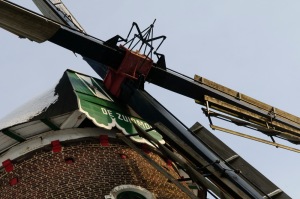 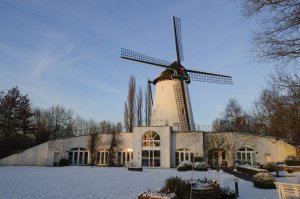 Yust looking for beautiful winterscenery, but not found.. not what I espected. As riding around I thought I could make some more windmill images. I’ve got about 250 different mills, but there are a lot more here. These are made in the surroundings of Groesbeek and Kleve in Germany (a few kilometers on the other side of the border) These were rather special at least, the first one is new rebuild I presume, south of Lottum, on Google-maps there is no mill to find on that spot…, and it was not on the road map. The second is a normal Belt-mill standig between Heijen and Afferden, the third (Groesbeek) has a special wingsystem, the fourth, standing in Donsbrüggen near Kleve has a very special pair of wings and has a self setting mechanism to put the wings in the wind. And the last one in Keeken, on the other side of the border near Millingen aan de Rijn has a house underneath it in the “belt” or hill.
The precise place I can find since three days because I’ve attached a GPS module to the camera which writes the data in the EXIF. Its a Geomet’r from Macsense. Simple, but it works (only on professional Nikon body’s) Just under 100 euro.